The City of Shasta Lake is located in Northern California and is a popular weekend getaway or vacation destination. It came to be in the 1930s when construction of the Shasta Dam was announced. Hundreds of workers and their families came to the area, new communities were created, and multiple businesses flourished. The city was incorporated on July 2, 1993.

According to City-Data, the estimated median house or condo value in 2015 was $170,407, which was an amazing increase compared to the $87,600 in 2000. Added to its attraction of having a small town vibe, the city has been beautified and improved.

There are five schools located within the city that are part of the Gateway Unified School District.

Lake Shasta is beautiful and clear with a surface area of 30,000 acres with close to 370 miles of red clay shoreline that is indented with little coves. Three rivers flow into the lake creating three "arms." It is California’s largest lake and one of the largest in the USA.

The Shasta Dam offers tours several times a day. It is the second largest dam in the nation and the world's tallest center overflow dam.

The Shasta Lake Reservoir is California's largest reservoir and is also the state's third largest body of water.

Take a ride on a catamaran and then a bus trip up the mountain to visit this underground geology. If you are boating, you go up the McCloud Arm of the lake.

This historic town was originally named Pusher because of the extra locomotives that were added to the train here to get it up the canyon. Here is the best catch-and-release trout fishing in the area.

Welcome to 1921 Oregon Ave! This updated 3 bedroom, 2 bathroom home offers 1,272 sqft of convenience and style. Enjoy the comfort of this spacious kitchen with an island,...

Looking for a great neighborhood in a prime location where you are 10 mins to Shasta Lake and 12 from downtown Redding? This 3 bedroom 2 bathroom home tucked back in Win...

OPPORTUNITY ABOUNDS!!! LARGE lot just off Lake Blvd with access to a railroad spur! Ideal for transporting equipment with plenty of room to build!

GREEN ZONE: TWO SEPARATE LOTS SOLD TOGETHER! I-5 Freeway Exposure! Over 3/4 Acres of Commercial land, with approx. 99 ft. of Cascade Blvd. frontage visible from I-5 Sou...

Happy New Year! Here is a great way for your clients to welcome the new year with this Shasta Lake beauty! With 3 bedrooms and a full 2 bathrooms your clients won't be ...

9 nice sized lots on the north side of Shasta Dam Blvd., west of Rouge Road. Only 1 AP # but 9 lots. Not far from Shasta Lake for boating and fishing. Great potential! 8 ...

WHAT!? A price change!?Very tastefully upgraded double wide mobile home in one of the best mobile parks in Shasta County! Low maintenance yard with rock & succulents. Up...

Two lots available in Shasta Lake City !! One lot is .3 acres and has a 750 sqft. shop on it that has water and power already running to it. Second lot is Just under an a...

Great potential on over a half acre lot for multi family complex or commercial structure with 118 feet of Shasta Dam Blvd. frontage and 125 feet deep with all utilities a...

2-Ready to develop Corner Lots sold as one.Both Zoned Community Commercial. Located in the Heart of Shasta Lake City on the Main Road. The City of Shasta Lake is very fri...

The Sale includes over 180 Acres in one of the most sought after regions of Shasta Lake City. Just a few miles to Shasta Lake, California's largest reservoir, fast access...

Attention contractors and developers! Six buildable lots at the end of the street in an area of nice homes and duplexes, each lot is 50 x 135 Utilities at street and a fi...

Great opportunity for this Tri-plex in South Shasta Lake City. Brand New 30 year comp roof installed and one of the units AC was recently replaced. Each unit features 2 B...

Commercial land for fast food or other business venture. No fast food restrictions. Corner of Second street and Cascade blvd. Adjacent to Burger King and across from Rite...

Contractors Special! So much opportunity to make this house your own! Currently a 2 bedroom, 1 bath on a large lot. Property is partially fenced and has fruit trees, deta...

OPPORTUNITY ABOUNDS!!! LARGE lot just off Lake Blvd with access to a railroad spur! Ideal for transporting equipment with plenty of room to build!

One of the most spacious lots available in the neighborhood. This property is level with easy access off Pine Ave. Owner to clear the lot as soon as the weather improve...

There is a green box (maybe electrial) that has the address on it 13900, from that box to the corner is all the property. The garbage on the property is the neighbors. Th... 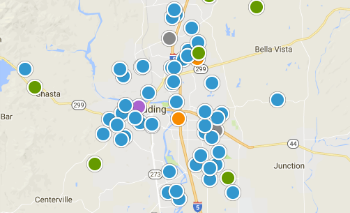